In Earl Bakken, Minnesota and Healthcare Lose a Legend

That’s the lesson a young Earl Bakken took, quite literally, to heart from Boris Karloff’s classic rendition of Frankenstein. Years later, when the world-renown Dr. Walter Lillehei from the University of Minnesota asked him to develop a battery power system so that pacemaker patients would no longer be in danger of dying if their care facility lost power in a storm, Bakken did much more than that: He used electricity to bring life back to patients.

His wearable pacemaker, the very first of its kind, meant that heart patients were no longer bound to the microwave-sized pacemakers of the past that needed to be plugged in. Instead, they could carry the device with them and live largely as they had before, giving them the life they once had back.

In co-founding Medtronic, Bakken ensured that his influence would go far beyond cardiac patients. The company is now a leader in diabetes care, neuromodulation, patient monitoring, and numerous other healthcare specialties. But Bakken’s tremendous influence doesn’t stop with patients.

Seeing that one of Minnesota’s greatest strengths was its collaborative healthcare ecosystem, Bakken, together with Lee Berlin of 3M and then-Governor Rudy Perpich, founded the Medical Alley Association to raise the profile of the community and the draw attention to the incredible work being done here. We strive to live out Bakken’s vision for the community by helping to strengthen the ties that connect community members, grow the next generation of companies developing life-changing healthcare solutions, and elevating Medical Alley as the global epicenter of health innovation and care.

Though Bakken died last weekend at the age of 94, his influence will continue far into the future. It will live on in the patients who wear his inventions, in the myriad people who benefit from Medtronic’s products, and in the world-class health technology and care community that he both founded and nourished. As long as Minnesota is a leader in patient-focused healthcare, Earl Bakken lives on. 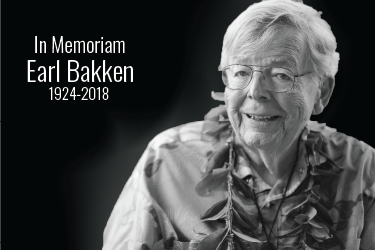