In a press conference on Tuesday, House and House Republicans reiterated their desire for Governor Dayton to sign what they consider to be reasonable bills, and claimed that Dayton was being unreasonable by turning down several spending and tax cut counteroffers which included concessions in spending increases exchanged between legislative leaders and the Governor.

The Governor fired back with his own press conference, where he firmly stated that he would veto any and all of the proposed bills if changes were not made to keep essential programs and protections in place.

The regular session is set to constitutionally adjourn sine die next week on Monday, May 22nd, giving lawmakers until the last minute on Sunday, May 21st to finish any and all business.

Any passed bills be must be signed or vetoed by the Governor ten days after passage. In the event that a bill is not signed or vetoed within ten days, it automatically becomes enacted into law.

On Friday, Governor Dayton vetoed five of the Republican Legislature’s budget bills after negotiations stalled on a compromise two-year budget.

Senate Majority Leader Paul Gazelka commented on the vetoes, saying, “While not unexpected, it’s disappointing that Governor Dayton did not sign any of the budget bills passed by the legislature this week … the governor’s vetoes ignore the wishes of the people [the legislature] represents.” 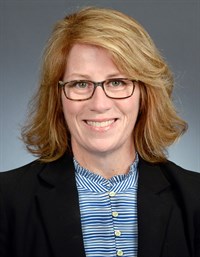 Representative Erin Murphy (DFL-St. Paul) represents District 64A, which covers a portion of the City of St. Paul. She was first elected to the Minnesota House in 2006, and has been reelected 6 times. She formerly served as House Majority Leader from 2012-2014, and currently serves on the Health and Human Services Finance and Reform Committees, as well as on Rules and Administration and Ways and Means.

1. Tell us about what you do for a living when you’re not serving as a legislator.Representative Erin Murphy (DFL-St. Paul) represents District 64A, which covers a portion of the City of St. Paul. She was first elected to the Minnesota House in 2006, and has been reelected 6 times. She formerly served as House Majority Leader from 2012-2014, and currently serves on the Health and Human Services Finance and Reform Committees, as well as on Rules and Administration and Ways and Means.

When I’m not serving as a legislator I’m a nurse, as well as an educator. Right now I’m helping to teach curriculum at the College of St. Catherine in the Doctor of Nursing Practice program.

I love to travel, especially in state – there’s just so much to see and do in Minnesota! Outside of the state I’ve traveled to Europe as well. If I had to say I have a favorite spot for vacationing and traveling, it would have to be Hawaii – the weather, and the atmosphere make it a favorite!

The community is important to me partially because of my background as a nurse. As a nurse, you’re on the frontlines of healthcare, and you understand why innovation in the medical health technology matters. It matters because the community is working to bring the latest cures and newest technology to us in order to save lives.

I’d like to see us pass a balanced budget this session. I’m also a big proponent of the MNCare buy in, and would like to see there be more done in terms of advancing regenerative medicine in Minnesota this session.

5. Use one word to describe yourself as a Representative.

In my line of work, which is nursing, we’re required to wrestle with the problems that are in front of us. You don’t get to choose to just stand on the sidelines and ignore the problems. That’s how I feel we should be dealing with matters in our state. We can’t shy away from confronting problems because the answers are hard, or because getting to a consensus is hard – we have to keep pushing forward until we find solutions that solve the issues at hand, for all Minnesotans.

On Tuesday, the Senate voted to confirm President Trump’s pick, Dr. Scott Gottlieb, to lead the Food and Drug Administration (FDA) by a vote of 57-42.

Gottlieb formerly served as a Deputy FDA Commissioner during the George W. Bush administration, and is widely considered to be competent and knowledgeable on industry matters.

In his role as FDA Commissioner, Gottlieb has promised to work to quickly implement mandates included in the 21st Century Cures Act, as well as expedite the FDA’s new drug and generics approval process by relaxing clinical trial requirements.

The House is expected to introduce legislation next week titled “Ensuring Patient Access to Critical Breakthrough Products Act of 2017.”

The legislation would aim to make medical technology products designated by the FDA as “breakthrough” covered through transitional periods by CMS.

The Medical Alley Association is supportive of this legislation, has signed onto a letter in support organized by the AdvaMed State Medical Technology Alliance (SMTA), of which Medical Alley President & CEO Shaye Mandle is the current Chairman.

You can see a white paper on the legislation here and the letter of support here.

The U.S. Senate HELP Committee marked up Medical Device User Fee Agreement (MDUFA) legislation and voted to advance it out of committee on Thursday.

The legislation will now move to the U.S. House Energy & Commerce Health Subcommittee for mark-up on the House language next week.