Thank you to Congressman Paulsen for taking the time to hear from Medical Alley Association members about issues important to health innovation and care industry! 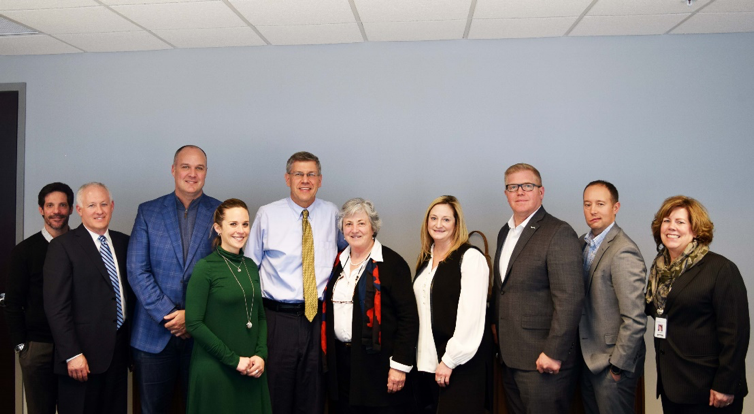 Medical Alley Members at the Capitol

This past Tuesday, we were fortunate to have Lonny Stormo of POPS! Diabetes meet with legislators at the Capitol about the 2018 Health Technology Economy Agenda (pictured below with House HHS Chair Matt Dean). A big thank you to Lonny for taking the time to come to St. Paul and share how important the health innovation and care industry is to Minnesota.

Here are updates on a few of the bills we are tracking.

The House Health and Human Services Finance committee heard the bill this past week. No changes were made to the legislation. As it reads, the University of Minnesota has oversight of the council, which will get information to families who have a member with a rare disease about available treatment, coverages, and general information about the disease. The bill was laid over for possible inclusion in the HHS Finance Omnibus bill.

The House companion (HF3196 – Fenton) was heard yesterday, Monday, April 16th in the Health and Human Services Finance committee. There was little discussion about the merits or necessity of this bill in any of the House committees –although several legislators expressed support. Much of this is due to work done behind the scenes by advocates for the bill. A number of meetings were held with concerned stakeholders and several compromises were made to address many of their concerns. This has resulted in no testimony in opposition to this legislation. The bill was laid over for possible inclusion in the House HHS Finance omnibus bill.

The Senate Health and Human Services Finance and Policy Committee heard SF2897 a few weeks ago where it was passed and referred to the Senate Finance committee – although if it is to move forward it will likely do so by being included in the Senate HHS Finance Omnibus bill.

Medical Alley Association is a member of the coalition supporting this bill.

The House Health and Human Services Finance committee heard this bill last week. Two amendments were adopted. The first requires the commission to evaluate all available alternatives for promoting access to health care for all Minnesotans. The second mandates the commission to look at other states and countries for ideas on how lower health care costs. The bill as amended was laid over for possible inclusion in the HHS Finance omnibus bill.

In the Senate, the companion – SF3417 – was heard in the Rules committee yesterday Monday, April 16th for a deadline waiver. It was sent back to the Health and Human Services Finance and Policy committee for possible inclusion in the omnibus bill – as it received a full hearing in that committee earlier this year.

SF730 contains the new tax on every opioid pill sold in Minnesota and a new registration fee & surcharge on opioid manufacturers. Currently, the bill is laid on the table in the Senate Finance committee for further work.

The House companion (HF1440 – Baker) was heard in the Health and Human Services Finance committee yesterday, Monday, April 16. Originally this bill was scheduled to be heard last Tuesday – but was pulled after an author’s amendment (which would have instituted a new registration tax on all manufacturers of schedule II & III controlled substances) was posted for consideration. The bill author did offer an author’s amendment – but one completely different from last week. It changed the makeup of the council created in the bill and adjusted requirements for those who can assess people for substance abuse.

This bill was referred to the House Ways & Means committee. It will, however, need to first receive a deadline waiver from the House Rules committee. We expect that to happen later this week.

On Thursday, the Minnesota House Ways & Means committee adopted budget targets for the 2018 legislative session. Although the state budget is balanced for the current biennium, the legislature is likely to pass a supplemental budget bill and adopting budget targets is the first step to doing this.

The House budget targets include $107 million for tax conformity and relief; $101 million for spending on transportation; and $50 million to address issues such as the opioid epidemic and elder abuse. These targets serve as the maximum amount each finance committee can spend in their budget areas. The Senate has not yet released their budget targets. Governor Dayton released his supplemental budget proposal in late February.

The House and Senate are each expected to begin passing budget bills out of individual committees early next week. We also anticipate that each body will release their tax conformity and relief bill late next week, with action coming on each the week after. We will keep you up to speed on any impacts to the health innovation and care industry.

On April 3, President Trump’s administration put forward a list of imported products from China on which it is proposing to place a 25% tariff. This proposal is being done under Section 301 of the U.S. Trade Act and is being done in response to China’s unfair trade practices related to the forced transfer of U.S. technology and intellectual property. Surprisingly, several billion dollars of medical device imports were on the proposed list – despite medical devices not being included as part of the Section 301 investigation leading to these tariffs. These products help diagnose and treat patient illnesses and additional tariffs on them will make health care more expensive.

We are hopeful that the United States and Chinese governments will come to an agreement eliminating the need for these tariffs. However, in the event the tariffs do move forward, we are working with members of Minnesota’s congressional delegation to exempt these products from the final product. Congressman Paulsen, in a Ways & Means hearing on April 12, expressed his disappointment that medical devices were included as part of the initial product list, due to the impact it will have on consumers and job creators.

We will keep you updated on our efforts and on how the health technology community in Minnesota may be impacted as this issue moves forward. Please let our Government Relations team know if you’d are interested in participating in outreach regarding the proposed tariffs: Bobby Patrick (bpatrick@medicdalalley.org) or Lilly Melander (lmelander@medicalalley.org) are ready to help!