At last week’s annual meeting, State Senator Carla Nelson (R-Rochester) was presented with MAA’s 2017 “Spirit of the Alley” award. Senator Nelson has a been a steadfast supporter of Minnesota’s Medical Alley, and has worked tirelessly in championing the R&D tax credit and clarifying biologics and biosimilars language this session. Additionally, Senator Nelson has worked to support her district by ensuring funding for Mayo, and other vital projects in the Rochester area. Thank you for all that you do, Senator! 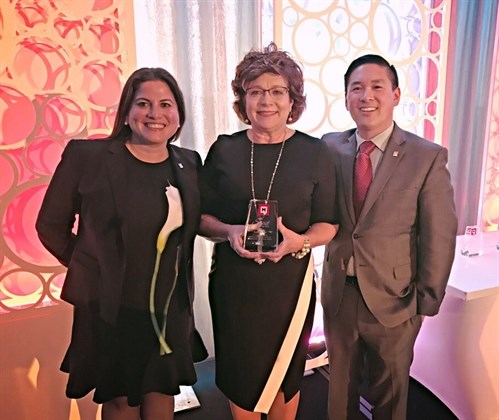 On Friday, the State House and Senate GOP released their budget targets, which would appropriate the following amounts to various aspects of state funding:

In total, the proposed joint $44.8B budget from State House and Senate Republicans, dubbed “Advancing the Minnesota Way,” aims to provide tax relief, fund a transportation package from the general fund, and increase spending for education.

Republicans Speaker Daudt and Senate Majority Leader Gazelka say they expect that with budget targets released, their continued talks with Governor Dayton will bring them closer to the passage of a comprehensive budget this session.  Conference Committee work to reconcile both bodies differences is expected to wrap up today to help encourage negotiation with the Governor’s Office.

With Republicans in control of the state house and senate, the Governor’s mansion is the Democrats’ last holdout towards accomplishing their own goals. GOP leaders have criticized Dayton, who has said that he will not join in on budget negotiations until the House and Senate present a unified budget.

Governor Dayton made it known that attempts to bypass or reduce his demands would result in a veto of the passed bills.

The state legislative session is scheduled to adjourn by May 22nd, 2017.

On Thursday, President Trump’s pick to head up the Food and Drug Administration (FDA), Dr. Scott Gottlieb moved past another stage in the confirmation process, with the U.S. Senate Health Committee voting 14-9 to approve Dr. Gottlieb’s nomination as Commissioner of the FDA. Next, Dr. Gottlieb’s nomination will head to the full U.S. Senate, where he will be confirmed on a simple majority vote.

Congressional leaders have struck a deal to keep the federal government funded through September. The resolution includes additional funding to combat opioid abuse and an additional $2 billion in National Institutes of Health Funding.  Votes are expected throughout the week.

The Medical Alley Association has signed onto the GCCA’s letter of support to President Trump and Congress. GCCA is asking the Trump Administration and members of Congress to continue to support innovation through medical research as well defending intellectual property considerations as they negotiate with America’s trade partners.

You can view a draft of the support letter here.